Online-Registration, free online tickets via eventbrite. A online registration is required for all festival screenings due to Covid-19.

Each year the festival receives many film out of German Speaking Countries, from whose this programe comes from. We also may invite certain films from other festivals to the festival´s curated programs. This year´s international poetry shorts side program is dedicated to experimental art film and animation. 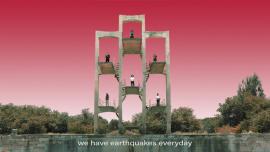 We Send Our Signal
Andrew Demirjian

We Send Our Signal draws upon an abandoned utopian vision as a setting for future sonic rituals. In this video poem, a former Soviet era diving board is reimagined as a communal antenna to signal other life forms. The text is a remix of transmission messages during interstellar communication scenes from Soviet sci-fi films.

Andrew Demirjian’s artistic practice and research is guided by considering the role of the question as a means to expand the possibilities of art forms, the why’s and what if’s that lead to new ways of seeing. Through building linguistic, sonic and visual environments that disrupt habituated ways of reading, hearing and seeing, he makes the commonplace strange to encourage critical reflection. The works are often presented in non-traditional spaces and take the form of multi-channel audiovisual installations, generative artworks, video poems, augmented reality apps and live performances. Andrew teaches theory and production courses in emerging media in the Film and Media Department and the Integrated Media Arts MFA program at Hunter College. https://www.andrewdemirjian.com/ 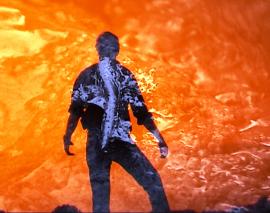 The Dolphin of Delphi
Giorgis Fotopoulos

"The Dolphin of Delphi" tells an idiosyncratic myth of the emergence of the Oracle of Delphi from the death throes of a dolphin and its child against the attack of an orca.

Giorgis Fotopoulos has made over a dozen short films, has published various reviews on film and has worked as an assistant director and production manager on feature films. He has been holding teaching positions and lectures on film and cinema at the Universities of Berlin, has worked as a dramaturge and director for off-theatre productions and has made documentaries for Arte and other TV channels. 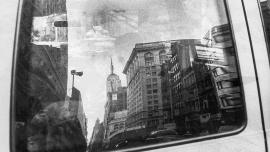 This short film is based on a poem I wrote remembering the two weeks I spent in New York, back in 2004, on occasion of my first photo exhibition overseas. I almost forgot this piece of writing, which I had strangely written directly in English during a feverish night, until it came back to my mind when I went to Portugal in the Fall of 2018 and I started dreaming about America at the other end of the lone Atlantic, beyond the long hypnotic waves and the corroded wharves. So, I suddenly started taking filmic shots inspired by the poem, and I felt that the film should include at least a few of the photographs I took in New York 15 years before. And also a single and especially painful picture I took in a Dutch hospital in 1997, interlacing through film-making different periods of my life and different artistic languages in what is more a portrait of psychic interior than a documentary.

Cesare Bedogné is an Italian photographer, film-maker and writer. His first, autobiographical novel and his black and white photographs were at the basis of the film "Story for an empty theatre", which he co-directed in 2016 with the Russian director Alexandr Balagura. He later worked at the short films “Maria’s Silence” and “The Last Step of an Acrobat”. All these films won numerous awards internationally and have been screened in prestigious film festivals such as the Montecatini International Short Film Festival, the "L'Europe Autour de l'Europe" Film Festival (Paris), the Harlem International Film Festival (New York), the London Greek Film Festival, the AMIIWorkFest (Vilnius), the Concrete Dream Film Festival ( Los Angeles) and many others.In July 2021 he finished editing a new short film, entitled “Photographing New York" and inspired by his homonymous poem. www.cesarebedogne.com 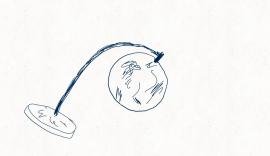 To Rosa Luxemburg and the many other woman comrades who have fought and are fighting for a just world.

Gaele Sobott is a writer living on Darug land in Western Sydney, Australia. Her published works include Colour Me Blue (Heinemann), My Longest Round (Magabala Books) and recent short stories in Hecate, Verity La, Meanjin, Prometheus Dreaming, New Contrast and the anthologies, Botswana Women Write and Not Quite Right for Us. Her poetry is published in various magazines including Disability Arts Online and Cordite Poetry Review. She is the founding director of Outlandish Arts, a disabled-led, not-for-profit arts organisation that focuses on words as the catalyst for experimentation and improvisation across various art forms. 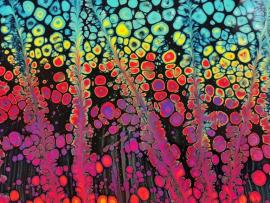 After Jeffrey Gibson’s exhibition “Like a Hammer” at Seattle Art Museum (2019), I was inspired to continue exploring more deeply the pagan aspects of my Baltic culture. This really spoke to me, as I continue to identify what it means to be both deeply rooted in pagan themes (nature) while dabbling in the inevitable spaces of fundamental biology. I wanted to experiment with this in my work. #isolation #nature #biology #virus #crowns #hertitage #Baltic #pagan #Lithuanian.

Lina Ramona Vitkauskas (Lithuanian-Canadian-US, b. 1973) is an evaporating language photographer = award-winning cinepoet / poet. For 20 years, she was part of Chicago’s poetry community in many capacities—as a reader, co-curator, collaborator, co-founder, organizer/facilitator, contest judge, and instructor. Her most recent collection of cinepoems, based upon her chapbook, White Stockings, is a collaboration with visual artist Tess Cortes. She is the author of the poetry books: Between Plague & Kleptocracy: Invented Poetic Creations & Conversations of Seva & Bill (2020); Ministry of Foreign Affairs – MOFA (Secret Airplanes Press, 2018); White Stockings (White Hole Press, 2016); SPINY RETINAS (Mutable Sound, 2014); Professional Poetry (White Hole Press, 2013); A Neon Tryst (Shearsman Books, 2013); HONEY IS A SHE (Plastique Press, 2012); THE RANGE OF YOUR AMAZING NOTHING (Ravenna Press, 2010); and Failed Star Spawns Planet/Star (dancing girl press, 2006). 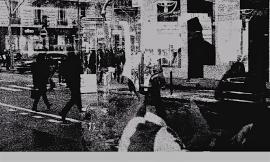 In " "Metro" we use documentary footage by George Chkheidze.  In the poem, memories slip in a stream of consciousness between the city, the city's past, the narrating I, and the now. This subjective biographical emotion is translated through the filming an experimental, abstract cinematic imagery, so that it is ultimately universally about the theme of transitions. The experimental film is about the transition into the subconscious, a dive into the underworld in search of silence, essence, depth and inner peace.

Giga (George) Chkheidze, was born on January 8, 1965 in Tbilisi, Georgia. In 1986 he graduated from the Tbilisi State Theater and Film School (camera course). At the same time he studied jazz and electronic music. 1986-1991 he worked as "Director of Photography" in Georgian state film studio "Gruzia Film". In 1992 he started his career as an independent filmmaker. Since 1993 he has realized several independent film projects in Moscow, London, Berlin and Munich. From 1998 to 2003 he realized several film projects in cooperation with DFFB Berlin and HFF Munich. His films have been screened at many prestigious international film festivals (Rotterdam, Oberhausen, IDFA Amsterdam, San Sebastian, New Directors / New Films NYC) and in film art programs of the Museum of Modern Arts MoMA, The Film Society of Lincoln Center NY, Anthology Film NY) as well as ARTE, 3sat, ZDF. His films have been broadcast by several television networks. He has received awards at several international film festivals. 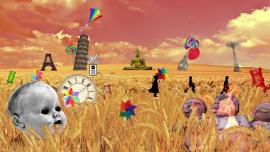 Delirium” is a vivid and surreal rendition of the poem “Lethe” by Tjawangwa Dema created by film students at the University of Washington Bothell collaborating under extreme conditions of COVID-19 quarantine. By utilizing original collage artwork and animation techniques intertwined with live-action videography, the viewer is guided through the degrading reality of a character with a cognitive affliction. The story-book style of collage and artwork invoke feelings of nostalgia and provide visual metaphoric representations of memory, reality and loss. The class interpreted “Lethe” as a descriptive expression of the complex and intense process of making sense of memories and realities in our world. Sometimes these experiences stay rooted like the ginkgo on the bank and others erode into the current.

Shanley Fermin is a Seattle-based artist with roots in the Philippines and Japan. His love for films while growing up pushed him to attend the University of Washington Bothell and pursue his Bachelor of Arts in Media and Communication Studies. Shanley is dedicated to bringing a vision together, like seeing puzzle pieces connect, and thus delivering them to audiences.

Thelma Tunyi is a gifted filmmaker who always thinks outside of the box. As a kid, she found filmmaking as a way to express herself and her ideas. Thelma’s ability to not only create but visualize stories in a variety of ways fuels her. She is a recent graduate of the University of Washington Bothell with a B.A. in Media and Communication Studies. 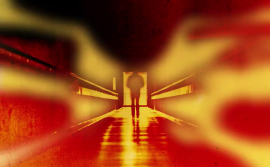 A man discovers 8mm family footage years later. When he takes a midnight walk through the city, memories of the lost family members start to mix up with the moment of reality.

Oliver Naumann was born in 1988 in Germany. He started studying woodcarving in Oberammergau when he was 16. After school he moved to Berlin and worked as a stagehand and carpenter. He was into analog photography. He bought his first camera in an antique market in Berlin and start photography. His works exhibited twice Brick Lane Gallery in London in 2012 and 2013. He moved to London in 2014 and start working as a set builder for tv serials and commercials. He always wanted to tell his own stories and make movies. Black Mirror, Dracula, Queen of Mystery, Endeavour, Gangs of London some of the serials he worked as a set builder. 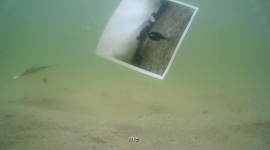 "M.e" is based on the poem "Monster and Girl" by Nora Gomringer and poses the question of the definable gender identity of women. The cruelty with which we submit to social norms and live only as foreign bodies contrasts with our feelings to explode this appropriation. The recurring question of the "I" ultimately remains unanswered, alone and isolated, as a justification before a male observer. A surrender? Or a strategy of survival?

Joanna Maxellon, born 1969 in Ruda Slaska (Poland), first studied classical literature and oriental studies at the Jagiellonian University in Krakow and graduated with a master's degree. After a one-year scholarship from the UN in Paris, she was in the war zone of Bosnia for eight months in 1994 for several photo reportages for the UN. Afterwards she moved to Germany and studied free art at the Academy of Fine Arts in Nuremberg from 1996 and at the same time design with focus on AV- media at the University of Applied Sciences for Design, Nuremberg. In 1998 she received a scholarship at the HfG Karlsruhe/ ZKM Karlsruhe for media art. From 2003 to 2018 she was the assistant of Prof. Ottmar Hörl - class Sculpture of the 21st Century at the Academy of Fine Arts Nuremberg. She lives and works as a freelance artist in Nuremberg and Karlsruhe. 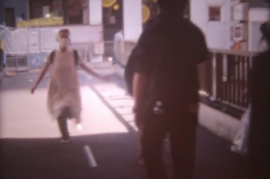 On 2nd April 2020 at Shibuya, 5 days before the Japanese government declared the state of emergency. A girl in a white dress gets running out from the crowd of people wearing face masks. The images of Shibuya on 8mm films may show the past and future figure of this city. 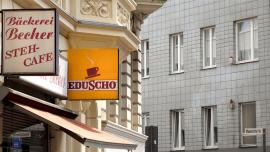 Based on the poems of a writer in a small town in former West Germany (1949–1990), "Im Toten Park" paints the portrait of a society that has lost its language. 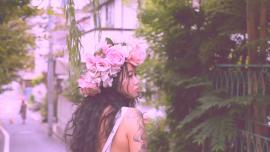 a poem-film about the appetite for desire itself. filmed in the yanaka neighbourhood of tokyo, which is innate with small reprieves of everyday mysticisms. 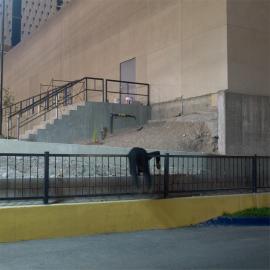 Misunderstanding of the / movement, furious / joy / The crafty medulla / flew without head. Stammering of the / disappearance, comfort / of the touch / Everything is good / Good. CLINAMEN is a project about "the fall": as the width of the movement and as a figure of the contemporany collective imaginary ...