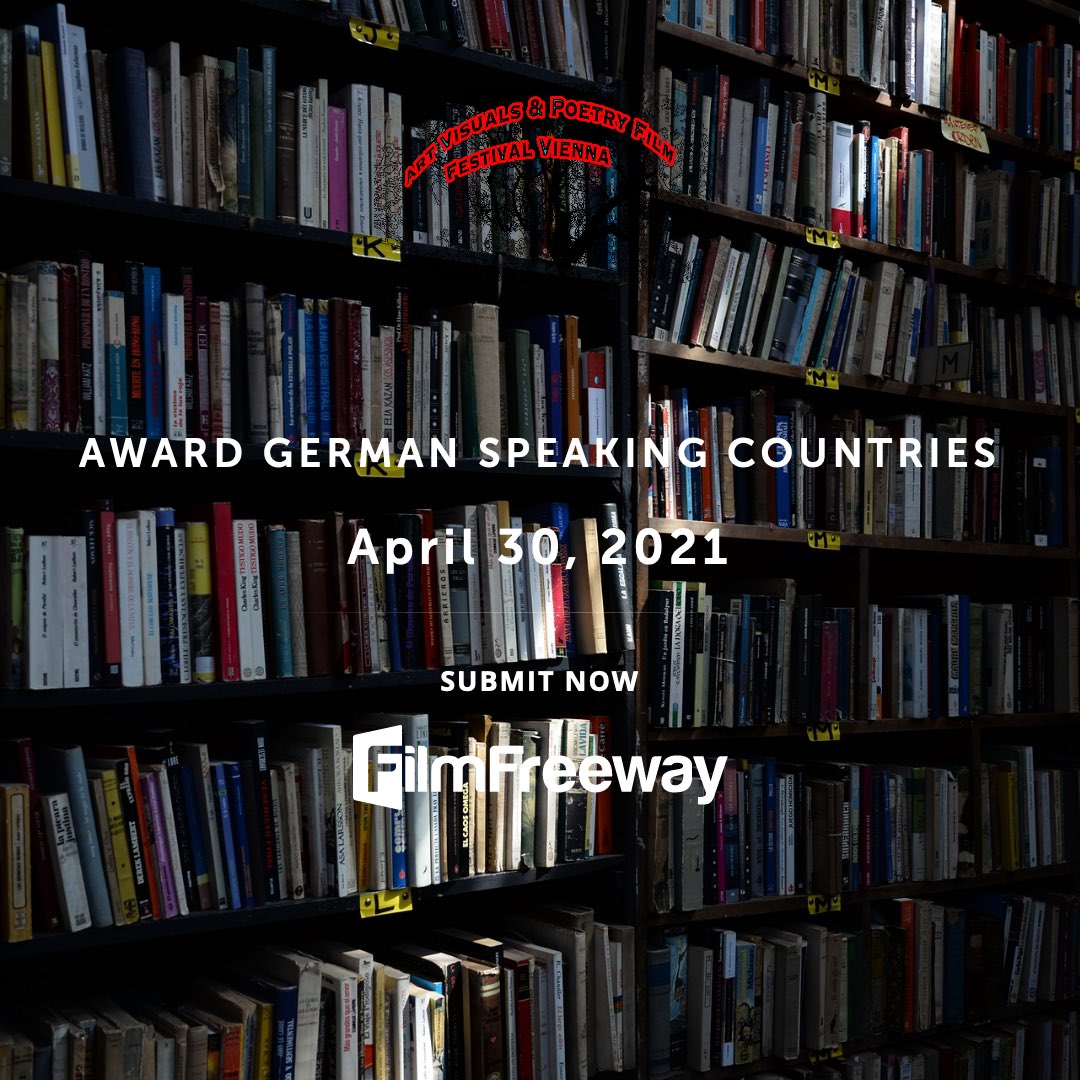 Why does it need a poetry festival? Simply for the reason, that the genre poetry film has grown very fast due to internet and mobile devices. Some poetry films go into galleries or media art festivals some others to poetry film festivals. Others make it into enter the major film festivals. There´s a lively and remarkable scene in London, Berlin and Münster and Weimar. But also Vienna has become a very important meeting place in the poetry film community as its second largest festival world-wide.

Due to several reasons we will continue to focus on German language, but we will increase the amount of international film screenings again by the curated side program. These films will be chosen by curators within a network of European poetry film festivals. We will also focus on host countries and their works to encourage a deeper understanding of other mentalities.

Please be aware: We can only accept competition entries from German speaking countries (residency or nationality) for the main competition. German language in the films is wanted. Exceptions will be made, when the literature shorts show an outstanding quality and offer German or English subtitles.

We know, that there is a great interest from the international community to participate. Therefore we have created a second competition called „SPECIAL AWARD“  after a given festival poem. This competition is open to film makers from all over the world. This time Antonio Fian's poem "ruhwunsch" was chosen as the festival poem. The theme of the festival poem is very up-to-date: it is about silence and about the big city. Silence in the metropolis in particular has taken on a whole new meaning as a result of the pandemic. It is obligatory to use this Austrian poem for the film adaptation.  "ruhwunsch" is available as an audio track read-in for the poetry film competition. It is read by the writer Antonio Fian himself. An English translation is also available and licensed for the competition. It is permissible to re-record the poem for the competition in the German original. We attach importance to the original text in the filmic realization. Ingenious exceptions, experiments and written films will be included on a discretionary basis.
In the past, this type of competition met with great interest among established filmmakers. To compete internationally with other artists in a direct comparison proved to be an interesting challenge. However, one of our aims for creating the SPECIAL AWARD was to create a low-threshold entry to poetry film. There were some film makers, who created their first poetry film in their life due to this competition. The professional studio reading for free offers a solid base for a good film. Let your creativity go free – go out and film....We will be excited about your results! You can download the spoken version of Antonio Fian's poem "ruhwunsch" in German for free. We also provide you with a licensed English translation of the festival poem under Creative Commons. It´ s very interesting, that this kind of competition attracts many professionals who like to experience different versions of films based on the same text. On the other hand, it offers people a easy chance to make their first poetry movie in their life.

For your records: Copyright agreement of the festival poem under Creative Commons

The Art Visuals & Poetry Filmfestival in Vienna is directed by Sigrun Höllrigl. Hubert Sielecki supports her as a film supervisor. Beside there will be an independant competition jury selecting the winner films and honorable mentions.

Selected films will be presented in curated side programs during the Art Visuals & Poetry Filmfestival, which is now scheduled for Middle of November 2021  in Vienna. We will let you know our program over the website. Beside the festival we organize poetry film screenings with other partners. Please let us know, if you want to be part of it.

The deadline for the Award German Speaking countries is April 30, 2021. For the SPECIAL AWARD after a given festival poem the deadline will be August 31, 2021

Competition deadline is April 30, 2021 for the Award German Speaking Countries and August 31, 2021 for the SPECIAL AWARD after the given festival poem.  You can submit by following this online link below and by filling in the Festival´s online submission form. For all platform users of FilmFreeway: there´s an entrance fee of 20 Euros, which guarantee appropriate film submissions. Please read carefully the guidelines! We are a poetry film festival and not a common short film festival. Therefore we only take literature & poetry films either from German speaking countries OR poetry films dedicated to the given festival poem by Antonio Fian.

Or without any fees via an online form on the festival homepage  Link to the online form!

-The submitted literary short film or poetry film has a length of 2 until 20 minutes max. and is based on a literary short text or poem.
- Regarding the AWARD GERMAN SPEAKING COUNTRIES: The film maker or director has an Austrian, German or Swiss passport or residency. Further international collaborations (composer, writer) in the team are welcomed. Re the SPECIAL AWARD: The film has to be based on our festival poem by Antonio Fian. You can make a new recording based on the German original text or use the voice recording we offer. Remixes of the existing voice over are allowed.
- The film is not older than 10 years (2011).
- The film has not been submitted before.
- ART VISUALS & POETRY is granted the right to screen the film in the context of the competition and the festival.
- The application and copyright declaration arrive in time. Deadline is April 30 or August 31, 2021 (SPECIAL AWARD). We prefer a sighting via internet link (password protected, vimeo, You Tube, dropbox).
- Please to not send us any films and information before being selected.The sightings of the films will be done online via vimeo, FilmFreeway, You Tube, Dropbox eg. All participants will be notified.The selected film makers will be asked to send the films including a short CV and a film still within 4 weeks of notification. Additional film information goes via e-mail to: office@filmpoetry.com
- SCREENING FORMAT:  We only accept films in the following formats: mov or mp4 File, H264, Sound uncompressed, 48 000 kHz, 16 bit.  The screening files should arrive in time until June 30 (Award German Speaking Countries) or Sept 30, 2021 (SPECIAL AWARD).
-In case of questions contact us via office@filmpoetry.com