The first competition screening of the main competition is dedicated to experimental poetry film. As a hybrid film form, the genre of poetry film very often moves in the area between experimental and animated film. A three-member jury will select a winner from the competition films, which will be presented on Sunday after the second competition block. The main prize of the festival is endowed with 1000€. 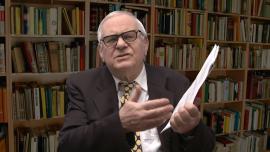 5 parts bourgeoisie uncovered. The texts are of a haunting absurdity and yet so close to the reality of life! Cooperation of Hubert Sielecki with the writer Pavel Novotny from Liberec, CZ.

+++This film runs out of competition+++

Hubert Sielecki born 1946 in Carinthia, Austria studied 1968-1976 at the University of Applied Arts in Vienna and at the Film School in Lodz, Poland. In 1982 he established the Studio for Experimental Animation Film at the University of Applied Arts in the painting class under Maria Lassnig, which he directed until 2012. Hubert Sielecki is a screenwriter, director, cinematographer, musician, sound technician, performer, draftsman, painter. He makes auteur films and mainly uses the technique of animated film. For his work Hubert Sielecki received numerous prizes and awards at home and abroad www.hubert-sielecki.at 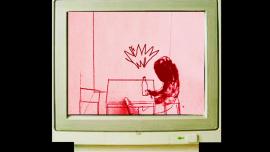 Hagen Klennert, born 1962 in Erfurt School attendance and painter apprenticeship in East Berlin. In addition to the apprenticeship, evening studies at the Art Academy Berlin-Weissensee.work as a decorative painter. In 1985 illegal emigration from the GDR. From 1986 in Hamburg, freelance work as a painter and graphic artist. First solo exhibition and book illustrations.1991 return to Berlin. Work as a draftsman and stage designer for projects in the theater and music. 2012 Art Prize of the Losito Kressmann-Zschach Foundation Berlin.

What is the silent moment between thoughts, moments and memories? "The Remembering Movement" poetically reflects on this moment. An experimental poetic film triptych based on the painting assemblage "Poetikweltlichter" by Marion Steinfellner and the poem "Inzwischen" by Marion Steinfellner and Mersolis Schöne. Connected by Michael Fischer's soundscaping, which weaves poetry and sound into a rhizomatic sound fabric triptych.

Mersolis Schöne is a researcher and artist living in Vienna, Austria. He is interested in film-based philosophical and scientific investigations, for example, the creation of knowledge, the communication of science, the relationships between physicality, movement and thought processes, the process of reading, and the contemporary reception of Friedrich Nietzsche. He has explored these themes in several short film documentaries, including "Thinking with the Hands" (2015), "Reading through the Body" (2016), the experimental poetic short "Deternity" (2018), and the short philosophical film essay "Science and Love" (2014). "THINKING NIETZSCHE" (2018) is his first feature-length film. 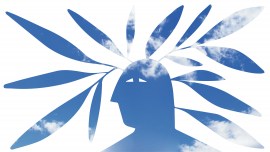 Where is the eye level? we asked ourselves. Is she perhaps sitting on a high horse? Or is she on the ragged edge? Is there eye level anxiety? And can blind people see at eye level? In this project, eye level becomes a place of realization of respect and discussion culture.

Lenka Reschenbach, studies graphic design and advertising at the University of Applied Arts Vienna, but also has a degree in law. She draws, writes and designs things.

Dominika Huber (*1995) lives in Vienna and studies at the University of Applied Arts. Her work is often created at the interface between text and image. In 2021 she completed a semester abroad at the UDK Berlin in the class for illustration.

Laura Besler (*1998, Innsbruck) studies in the class for ideas at the University of Applied Arts Vienna. She is engaged with and interested in communication, illustration, language and graphics. 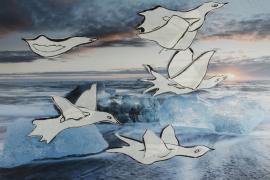 The animation visualizes a poem by Melitta Grünbaum, a Jewish poet and philosopher who fled to Iceland in 1938. It is about the letter as a sign of life from another world, which one longingly awaits in one's own isolation. 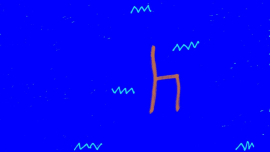 A chair spinning around itself asks itself what day it is today... 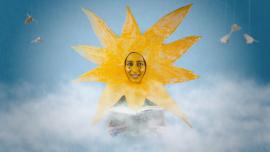 It's Lynn's birthday, but noone pops in, not even her parents. An online baking tutorial promises happiness, so why not try out? Indeed Lynn feels much better. But is it still Lynn anyway? A poetryfilm on the challenges of isolation and the false promises of salvation. Based on a poem by the German poet Ulrike Almut Sandig, translated into music and film by her art collective Landschaft. No matter how distanced you feel these days, don't forget to laugh. Or smile. Even in despair.

Sascha Conrad is a German filmmaker and author for TV and radio based in Leipzig (Saxonia). He has been working as a freelance filmmaker since 2008. His poetry shorts with the German performance poet Ulrike Almut Sandig have been screened in India, Austria, Ukraine, Germany and in the UK. Their poetryfilm LEXUS was nominated for the Weimar Poetryfilm Prize in 2008, their poetryfilm LANDSCHAFT was nominated for the ZEBRA Poetryfilm Award in 2019. Since March 2020 Sandig's and Conrad's latest work LEUCHTENDE SCHAFE / GLOWING SHEEP is a part of the temporary exhibition in the museum Hölderlinhaus in Tübingen (Germany). 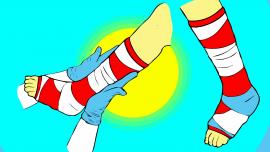 audio-video-strips. automatic talking. automatic animation. first were the audios, then animations were added.

Mariola Brillowska, visual, media and performance artist as well as author, director and producer, was born and raised in Poland, emigrated to Germany at the age of 20, where she studied fine arts at the HfbK Hamburg; 2005-13 she was an art professor at the HfG Offenbach/Main; works include novel "Hausverbot" 2013; winner of various film, poetry and radio play awards, a. o. a. ARD-Pin Ball Award 2014, BHF Kurzes Mikro 2017, MUVI - Audience Award Oberhausen 2017, German Short Film Award "Goldene Lola" 2017; Shortlisted for nomination to Oscar-Shorts 2019; Radio Play Award of the Critics "Adrienne" 2019; Winner of the German Film Critics Award 2019. 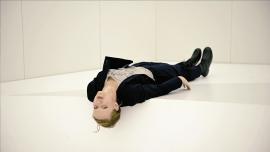 "L'usage du mot/The Use of Words" draws correspondences between three languages, invents them, lets them slide into each other. The poet talks to Ulysses on the phone, walks from speaker to speaker in the White Cube, crawls like an insect, regulates - optically doubled - invisible traffic. Scenic performance on minimalist multilingual poetry by and with Cia Rinne. 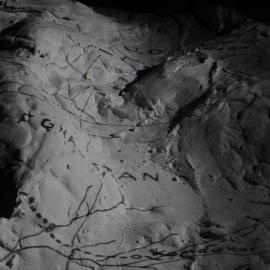 The excerpt from a poem by Russian-American Nobel Prize winner Joseph Brodsky is a frozen description of time in the Soviet empire of the 1980s, a metaphorical reckoning with a technocratic regime, and a nightmarish imagery of war.

René Reinhardt graduated from the Ernst Busch in Berlin with a degree in acting. He gained his first professional experience at the Berliner Ensemble and in films by Rosa von Praunheim and Margaretha von Trotta. Together with Anka Baier he initiated the theater and film art house Schaubühne Lindenfels Leipzig in 1994. In addition to his theater work, he has produced cinema projects, including the feature film "Das Monstrum".

The Leipzig video artist Thadeusz Tischbein is mostly interested in the strange intersections of history with everyday life. His view of the world often does without people, although the stories about death and about long-forgotten details are, of course, about people's lives. He studied in Bucharest, Leipzig and Braunschweig. His films have screened at numerous film festivals, including EMAF Osnabrück, IndieLisboa, Stuttgart Filmwinter, MANIFESTA 12 Palermo. 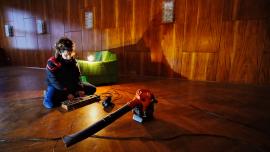 move a space out of nothing / the glow in it / in the old leaning court / that we left behind / to revive it once again / to warble a song / to speak a sentence / without an audience but squeaking / it echoes, falls, something rots / sits in the distance /We'll see each other...Under the project name endlos.beta, the film "Anlehnungsbedürftig" was created as part of a 6-month working residency by the artists Römer, Kiss, Behr in March 2021 in the small Saxon town of Augustusburg near Chemnitz. It is part of the site-specific poetry video series "Nachrichten aus dem Schattendasein." https://www.endlosbeta.de

Hanne Römer (*1967) Since 2000 in Vienna independent author / artist at the intersection of literature, visual and auditory art. Conception / authorship / self-definition of this interface: .aufzeichnensysteme. https://aufzeichnensysteme.net

Margarete Kiss (*1992) The Berlin-based artist works in various contexts on participatory, cross-disciplinary and site-specific projects at home and abroad. http://margaretekiss.de

Konrad Behr (*1974). In addition to radio and sound art productions, documentary video and photo work is one of the main focuses of the Dresden-based media artist. https://konrad-behr.de 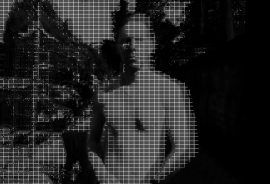 Giving up is not an option. An audiovisual mood report against the background of omnipresent trouble spots and the defeatism of our time. A joint project by Kuesti Fraun and Andreas Genschmar from the series "Tenderness in the Shark Tank".

Kuesti F, * 1976, lives and works as a freelance filmmaker and author in Düsseldorf, and produces short-format stories in text, image and sound, with which he has been represented worldwide at film festivals, exhibitions, galleries, museums, television and radio shows, both independently and with the collective mobtik, which he co-founded, since 1999.
Andreas Genschmar, musician, actor and family man from Berlin. 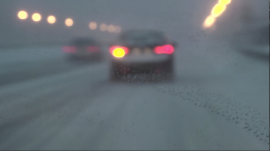 In the experimental film "Pandemia", the audiovisual interplay creates a surreal, floating odyssey outside of space and time.

+++This film runs out of competition +++

Sigrun Höllrigl, born 1966 in Innsbruck, grew up in Switzerland. Studied German language and literature and philosophy in Vienna. Since 2008 freelance artist in the fields of literature, film, media art and event organization.Since 2011 director of the ART VISUALS & POETRY film festival in Vienna. In 2015 publication of the lyrical novel Ulysses X. In 2016 the 2nd novel " Das Lager" is published.  With her poetry films Sigrun Höllrigl is represented internationally at festivals. She lives in Vienna and Lower Austria. 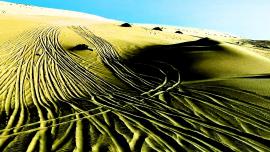 that if we go into the desert
Katia Sophia Ditzler

2 1/2 hours of butoh performance accelerated to 5 minutes. A psychedelic performative poetry film that plays with mythologies of exile, the realm of salvation, and travel through time and space. You will forget where above and below are, where the desert ends and the sky begins.