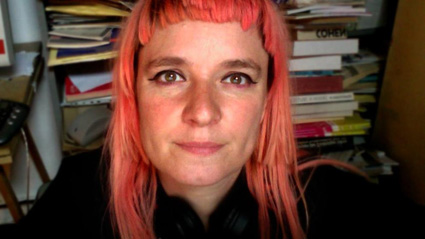 Content description: Mrs. Identity Card is sitting in the middle of the sea and is having lunch. She is very surprised that the shipwrecked African, who has just swum 12 hours, does not carry ID or lunch. But she then shares her vitamin biscuits, calls her servant and brings him to an island, from which he is later washed back with all the other refugees back into the sea. Maybe to Europe, maybe not.

Jury statement:
"Black Wave" is not just an animated film, it is a political statement that entertainingly and bitterly, but above all completely unpretentious reveals the problems of European refugee policy in the Mediterranean. The film is based on a private recording as an improvised radio play by Felix Kubin and Bela Brillowska. This dialogue was animated by Mariola Brillowska in her special style, in reduced but bright colors on a black background. The effect of their pointed images in interaction with the dry dialogue on this highly explosive topic is not only astonishing but also lasting.

Mariola BRILLOWSKA, born 1961 in Sopot / Danzig, studied from 1984 to 1991 at the University of Fine Arts in Hamburg. She has been producing animated films since 1988, and anarchist performances and theater shows are also part of her repertoire. Her film Grabowski, House of Life received at the Short Film Festival Oberhausen in 1991 the Grand Prix. From 2005 to 2013 she was a professor for drawing and illustration at the Hochschule für Gestaltung Offenbach am Main. Participations in numerous international exhibitions and festivals as well as retrospectives of their works and film shows take place on and on, inter alia. in New York, Warsaw, Beijing. In 2013 she / MB published her debut novel "Hausverbot". www.mariolabrillowska.com