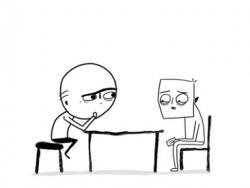 He says: “Everything is mostly nothing. Look closely and you can see all the little bits and pieces, and all the gaps in-between.”Mr Madila or The Colour of Nothing documents a series of conversations between the film-maker and a gifted spiritual healer, exploring the inner mind, the fabric of the universe, and the nature of reality itself, through the sacred art of animation."

Rory Waudby-Tolley is a young animator and London based human. He likes to tell stories with moving pictures. 2D, 3D and any other dimensions. He is a film director at Beakus. and graduated at Royal Academy of Arts in 2015 . Mr. Madila was awarded many times. More: rorywt.com/mrmadila