The Art Visuals & Poetry film competitions  are officially launched begin of January 2019. We would like to introduce the festival poem "First" by Sophie Reyer to all. The poem is the required basis for the international competition called SPECIAL AWARD. The audio recording of the text is still in progress and will be made available for all competitors free of charge as in the previous years.The "Special Award" is a poetry film competition of its own within the festival. The SPECIAL AWARD acchieved great interest in the anglo-american world during the last years. In this competition different films based on the same poem compete with each other. It is always amazing and surprising, on how many different ways a poem can be filmed. Experiencing it, makes the thrill of this competition! The SPECIAL AWARD of the Vienna Poetry Film Festival gives also an idea of the inherent creativity of poetry film making itself.

The best poetry films will be selected and shown during the festival at the Metro Kinokulturhaus. An independent jury chooses from the selected films the winner, which will be awarded with a cash prize. Sophie Reyer will participate as a festival guest and present herself in a reading at the festival. 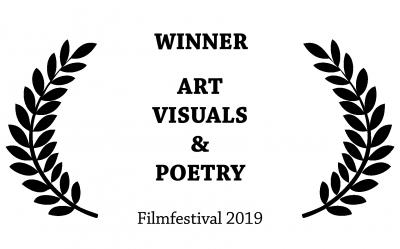 Downloadlink of the reading by Sophie Reyer (Creative Commons)

The poet Sophie Reyer has commented what her poem "First" below means to her: "We are always in a special state of mind, when we begin: The lyrical text" first "works with descriptions and critical reflections of the contemporary Western world, consciously linking them with quotations from the classical lyrical canon and ancient myths from a time when the world was still in order. As foreign material collection serve archaic images and a wealth of quotes from fairy tale and legendary literature. At the same time, the image of the beginning returns as an important structural element and links the different texts into a large, entire tissue. "

But this saying should not dissuade you as a film maker from risking a very own interpretation!

Sophie (Anna) Reyer was born 1984 in Vienna. She studied at "Kunsthochschule für Film und Medien" at Cologne and in Graz music composition. Her PhD was finished at  the University of Applied Arts in Vienna. So far she has published five books of poetry, the last one was „schnee schlafen“ (Loecker Verlag 2017). She was awarded with the Literature Award by the city of Graz in 2007, the Manuskripte-Förderungspreis in 2009, and she received the START state grant in 2009 and a additional literature grant by the city of Graz in 2013. Sophie Reyer has published three novels. She has also written various theatre plays, i.e. "Anna und der Wulian" (first performance 2014 at Badische Landesbühne). www.sophiereyer.com

First, people are scattered into time like this.
and have conjunctiva between their hands
and smooth each other's faces
and their fingers entwining each other are tethers
and they listen to the lisping skies
and sometimes rise from silence
and set off in the morning
and they know: Yesterday the city was singing
and tomorrow will be lunch again
and when the night crawls up, sleep is a bunk
and they give each other words:
words of honor sun words
bent and bonged
colorful hunchbacked knitted words
and plaid patterned words
milked and milky
for breakfast they give each other lispel grass and other growths
and the cracking of moments is not laborious
and the hurdy-gurdy of thoughts is laughed at
so these people are scattered into a time that shines

Mark Kanak is a German-English translator/radioplay author/noisemaker, splitting time between Berlin and Chicago. His poetry and translations have been published in various journals in both Germany & the US and he's currently working on various projects including translation of Heinrich Dubel's Helicopter Hysteria and work by Austrians Peter Pessl and Günther Kaip. Mark Kanak's work and translations have appeared in journals throughout the world, and a collection of poetry in German was recently published in Vienna. He has also translated into German Jeff Tweedy's adult head. Kanak was the recipient of the 2006 Gertrude Stein Award for Innovative Poetry, he is the translator of Aquamarine by Peter Pessl and Letters, Vol. 1 by Otto Dix.

*Copyright request: Please always mention Sophie Reyer and the translator Mark Kanak, citing, publishing the poem "Zuerst/First" or referring to the festival and THE SPECIAL AWARD 2019.