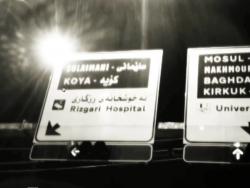 "In January 2013 I was invited to create films inspired by poets and poems I encountered from both Iraq and Scotland as part of the Reel Iraq festival in Erbil. It was an incredible trip and an honour to work with Reel Festivals again. I first heard Ghareeb Iskander's poem, during a magical evening in the mountain village of Shaqlawa when the poets were sharing the fruits of the first days of translating each others works over a glass of wine.. or two....As John Glenday read out in English his translation of Ghareeb's poem, I was immediately struck by the imagery in it and how the sentiment resonated with how I felt on coming to Iraq for the first time - a mixture of feeling the weight of the history mixed with an aching sense of loss.I should also add at this point that the poem in the film is an extract of a much longer work ( in three acts) on Gilgamesh. Image wise I was drawn to empty sites across Erbil. First of all the many building sites that lay scattered across much of the city and how they had this haunted quality - almost like abandoned old theatres. I was also drawn to filming in the empty ancient Citadel in the centre of Erbil which dates back over 3,000 years and had 3 years ago been emptied of its inhabitants to be preserved as a UNESCO site. Both these locations resonated with the emotional landscape in Ghareeb's poem for me and also lent visual space to house the images he was creating in the language." Roxana Vilk

Ghareeb Iskander (born in Baghdad 1966) is an Iraqi poet currently living in Baghdad and teaching Arabic Language at Imam Musa al Kadhim College. He has published numerous collections of poems including, most recently, Af’a Gilgamesh (Gilgamesh’s Snake) in 2012. A Chariot of Illusion, a selection of poems translated into english, was published in London in 2009. His critical work includes Semiotic Trends, a critical examination of Arabic Poetry, which was released in Cairo and Beirut.