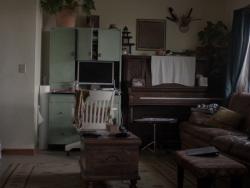 A DAY AT THE MALL REMINDS ME OF AMERICA (USA)

Ayse Altinok is a Turkish-born Film Director currently based in Los Angeles where she creates film and commercial content. Over the last decade Ayse has been recognized internationally including winning a Cannes Film Festival “A La Flip” Award, a Van Gogh Award, a One Show Award, Gold Clio, an Epica, an Art Director’s Club Award, an AICP and an Andy Award. In 2014 Ayse has directed a short film called "A Day At The Mall Reminds Me Of America" this piece was exhibited at the Hammer Museum, Walker Art Center and Figge Art Museum. http://www.aysealtinok.com

Sarah Blake  is the author of the poetry collection Mr. West (2015), an unauthorized biography of Kanye West. She earned a BA from the College of New Jersey, an MA in creative writing from the University of Texas at Austin, and an MFA from Penn State University. Her poetry has appeared in the Boston Review, Michigan Quarterly Review, FIELD, Sentence, the Threepenny Review, and elsewhere. Blake is editor of Saturnalia Books, poetry editor of MiPOesias, and cofounder of Submittrs. She is the recipient of an NEA literature fellowship and lives outside of Philadelphia with her husband and son.

The poem including interview is published here:  http://motionpoems.org/episode/day-at-the-mall/