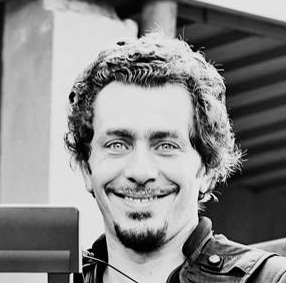 Andrea Capranico is an Italian documentary and commercial director/producer based in Manila, Philippines.

Born and raised in Torino, Italy, he graduates in Chemistry in 2000 and, after few years of science research and corporate work, he pursues his original dream of being a world traveler, a photographer and a filmmaker.

After consolidating his experience with a targeted education in visual storytelling in California, Andrea establishes himself as director for documentary and multimedia productions in Asia and Africa, both as independent contractor for different international and humanitarian institutions and as in-house Director of Production for a UK-based media agency firm, working with major clients and broadcasters in Asia and Africa.

As independent documentary director and producer, Andrea is currently developing, producing and shooting a series of short and long-feature observational documentaries in the Philippines and in Asia, and is collaborating as associate producer for a number of Filipino narrative movies.

Shot over three years, his first long-feature observational documentary “The Undertaker” (directed by Andrea Capranico, produced by Bianca Balbuena and developed at Busan first Al Jazeera Viewfinder Asia Program 2012), had its Asian and World premiere at the Singapore International Film Festival 2014 and it has been also recently selected in competition in a number of festivals and venues in Europe during summer 2015.

Hollywood Reporter picked "The Undertaker" as one of the nine must-see movies at SGIFF2014, out of more than 150 titles.

In 2015 Andrea was releasing his second long-feature documentary: “The Landscape within” (a lyrical portrait of a body-painter and conceptual artist in the rural Philippines) while continuing production of his third feature observational documentary “Alvis for PRES” (the story of a Filipino Elvis Priestley’s impersonator committed to Industrial Safety in the outskirts of Manila).