In between the 2 year festival break wie are present with our ON TOUR programs. For all who have missed the festival there are another chances to see the program during several co-operation with larger or smaller art events. We start with a very rewnowned institution - Künstlerhaus Vienna beside Musikverein - at December 12, 8 pm with the competition program III and the winner film of the festival. Entry is free! 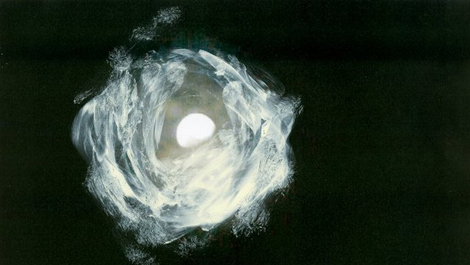 „Just let the people float around you, don´t push".

Gudrun Krebitz is born in Graz, Austria and lives in Berlin. Master in animation at  the "Royal College of Art" in London. Before bachelor at University for film "Konrad Wolf "Potsdam-Babelsberg in animation. gudrunkrebitz.com

The main competition will be finished by this third and last screening, which contains another 8 films, which are mainly narrative. After the films the winner will be announced and honored on stage by the independant jury. After the award-ceremony multi media artist and visual poet Jörg Piringer will perform live on stage. We hope to see you there!

Set against the backdrop of post-war Germany, the screen adaptation of Siegfried Lenz' short story released in 1949 shows a snapshot in time of Mr. Schwamm, an indulgent husband and caring father, who wants so save his depressed son. During the pivotal night of this mission, he has an odd encounter....

Konstantinos Sampanis studied Media Management and is an autodidact filmmaker. During his semester abroad in California, he directed the short film SIX FEET DEEP, which later on was awarded with a regional Emmy in the U.S. One year later, one of his Manufaktur-Films was awarded with the prestigious German Industrial Film Award in Berlin. In early 2016 he finished his next short film SON, which is based on a short story by the prestigious German author Siegfried Lenz. As an artist Kons’ work focuses on the emotional essence in a reminiscent mood and subtle manner. His movies always carry his very own thumbprint: a completely consistent look with quintessentially aesthetics and strong love for detail make his visual language highly recognizable and gives his films a hand crafted cinematic experience.

The Facts in the Case of M. Valdemar (A)

Based on Edgar Allan Poe's short story of the same name, the movie tells the story of a hypnotist who hypnotizes his dying friend M. Valdemar by using mesmerism to find out how this condition affects the death of a patient.

I was born in Klosterneuburg, austria, half-french, half-austrian, and since I was 12 years old I'm obsessed with movie making in all its forms and varieties, starting with small no-budget and no-equipment productions, slowly growing to make more professional movies, but still with the same ambition and love to movies. Sounds pretty clishé and cheesy I think, but sometimes life is clishé and cheesy. I currently live in vienna, austria, studying editing at the Filmakademie Wien.

The poem short film „23 Lëtzebuerger Jongen“ („23 Luxembourgish lads”) adapts the poem of the
same name by Luxembourgish writer Wëllem Weis. He dedicated his work to 23 members of the
Luxembourgish resistance, who were executed in the Hinzert concentration camp in south-west
Germany in 1944.
Julian Weinert was born in 1989 in Neunkirchen. He earned a Bachelor of Arts in Media Studies and German Philology at the University of Trier in 2014. In 2017 he finished his master’s studies in Time-based Media at the University of Applied Sciences Mainz, majoring in film directing.

I was reading from a chapter of James Baldwins novel "ANOTHER COUNTRY". It is a reflexion..a guy, loved and hated, between feelings of guilt and autodestruction, analysing his life..new knowledge of reality. The photography & Video is mainly from my "Exhibition Heartlandmoods-NYC-..now, then & the times in between".

The poem "fukushima" was written by Scardanelli shortly after the nuclear desaster in March 2011. The poetry film appreciates the corageous manner, how Japan handled the nuclear accident.

Aymeric Nager is a film maker working as a stage and creature designer in film & theater. He is now working on a longer documentary about the poet, Scardanelli. Scardaneli studied violine and philosophy in Konstanz and published several poetry books. His real name is Torsten Preisser.

"The Travel Diary" speaks about a journey trough a landscapes without peoples, which is also a journey trough a inner landscape. The text comes from the off and comments the movement. Friedel & aGrey create a special atmosphere by sound and images during  story telling, which is timeless or out of time.

Friedel Kantaut is working as an artist with imagery, text and music since 1982. He uses readings, concerts expositions, film and performances to share his work.

The dancer Ichi Go reveals her ambivalent attitude towards tradition in the modern world as she breaks out through a traditional Japanese garment inside an underground passageway in dance with a poem by Shuntaro Tanikawa.

Rain Kencana was born in Jakarta, Indonesia in 1974.  She moved to Berlin and studied digital production at the Film University HFF Babelsberg Konrad Wolf . Since then she edited dozens of music videos and moved on to inventing stories. "Goldfish" received one of the main awards at the ZEBRA Poetry Film Festival Berlin/Münster 2016. www.rainkencana.com

Originating in the Parisian suburbs, Parkour is a “kinetic” art form that involves jumping walls and other obstacles in urban environments. It also evokes the feeling of weightlessness inherent to big cities but which is gradually disappearing. Schwerelos follows a group of Parkour “tracers" from Vienna and slam artist Fatima Moumouni, who pens a poem on the city and young people’s attitude to life.
Jannis Lenz, born in Filderstadt near Stuttgart, collected his first camera and directing experiences by filming himself and his friends doing Parkour and Freerunning, a performing art in urban environment. Since 2010 he studies Directing at the Filmakademie Wien with Michael Haneke and Wolfgang Murnberger. 2010 member of the Filmkoop Wien, in 2014 Guest- Student at the Max- Reinhardt Seminar for Theatre- Directing and Acting. In 2015 Bachelor Degree with distinction in film editing with Michael Hudecek at the Filmakademie Wien. Jannis Lenz Films and Video - installations are shown on numerous international festivals and exhibitons and have been awarded several times, e.g. Best Short Fiction at the Diagonale - Festival of Austrian Film and a Special Mention at Edinburgh International Film Festival.