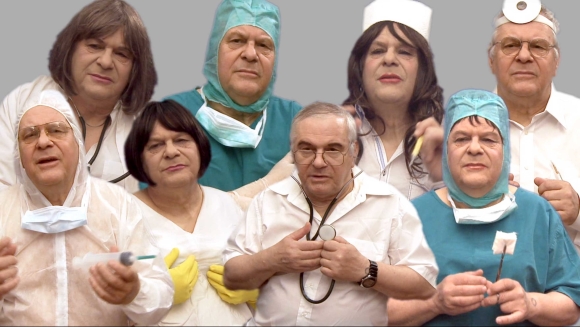 The Longest Kiss (A)

Text: Gerhard Rühm "The Longest Kiss" .
The poem is based on a newspaper article: The longest kiss in the world continued for 30 hours, 59 minutes and 27 seconds.Clara and Hannes who kissed each other for the first time on November 21, 1986 are determined to break this world record on Valentine`s Day, February 4. The world record attempt will be organised by the Association of Pharmacists. The pharmacists want to promote superior oral hygiene. They refer to the fact that during a normal kiss 40 000 parasites are transmitted, besides nine milligrams of water, some fat, proteins, salt and also 250 species of bacteria. The Association of Pharmacists chose Clara and Hannes because at the age of respectively 38 and 41 years they would be experienced. During the world record attempt they are neither allowed to lie down nor sit and may not visit the toilet.