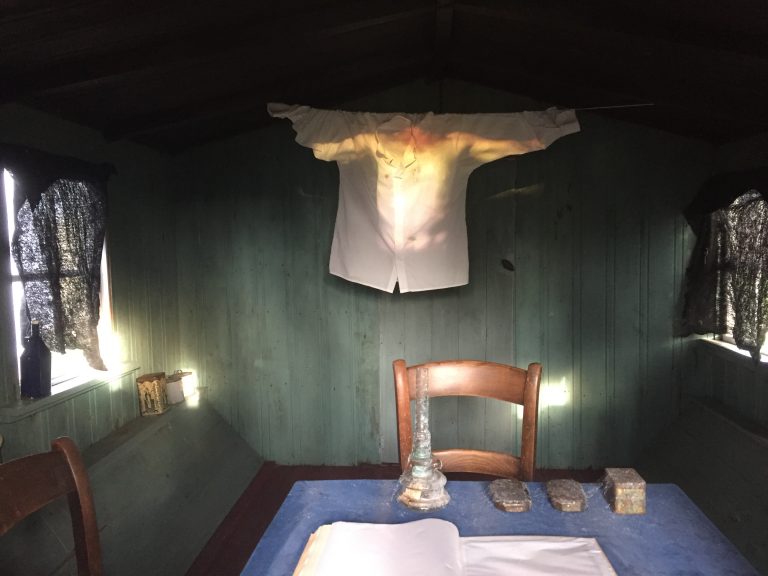 In 2020 it is a hundred years ago that Domela Nieuwenhuis (1846-1920) died. In his time, Domela – as a pastor, freethinker, socialist, anarchist, anti-militarist, but above all as a fighter against social injustice – was famous and notorious. They called him ‘us ferlosser’, our savior. It was him who united the poor poor peat cutters….

Pat van Boeckel is a Dutch artist, specialized in the documentary film genre and video art.
His video art examines the intertwined relation between humans and their (natural) environment. In general his work is characterized by its apparent simplicity. Through its slow pace it contrasts with the speed and volatility of modern visual culture. The embodied experience of time and place is central to both his documentaries and video art works. He prefers to project his video art in and on existing objects and spaces, thus adding new layers to the moving image. It enables him to twist and play with meanings and expectations. In the process, he invents his own language of signification, leaving the audience the space to make its own interpretations. The majority of his documentaries have been broadcasted on Dutch public television. His video art is made on location and is exhibited internationally (from Germany, UK, USA, to Russia, Japan and Mongolia). http://patvanboeckel.nl/

Domela Nieuwenhuis studied theology in Amsterdam and was pastor of the Evangelical Lutheran Church from 1870 to 1879. He was already pacifist-minded in those years. In time, he realized the contradictions of Christianity. After leaving the church, he joined pacifist and socialist movements. In 1879, he founded a magazine called Recht voor Allen (Law for All), where he served as editor until 1898. On January 1, 1882, Christiaan Cornelissen became co-editor of the journal. In 1886, after an article in the paper not written by him, he had to serve a year in prison for lèse majesté. On January 6, 1881, Domela Nieuwenhuis sent Karl Marx his book Kapitaal en Arbeid, a summary of Das Kapital with printed and handwritten dedications. Marx made numerous markings and annotations in his copy. After his release, he visited several prominent socialists abroad, including Friedrich Engels.[2] In 1898, he founded a new journal, De Vrije Socialist; it appeared with changing titles until 1993. From 1888 to 1891 he was a member of the Second Chamber of the Dutch Parliament, although he rejected the parliamentary system. He attended congresses of the Socialist International and propagated the right to conscientious objection. He can be counted among the co-founders (1894) of the SDAP (Sociaal Democratische Arbeiders Partij, Eng. Social Democratic Workers' Party), which was still quite radical at the time. Only three years later he turned his back on it again, because he wanted to follow a radically anarchist and revolutionary course. Domela Nieuwenhuis founded the International Anti-Militarist Association (IAMV) in 1904 and was conspicuously active only once after 1900, when railroad workers went on strike in 1903 over a dispute over union recognition. This strike, however, was unsuccessful, at least in the short term. He welcomed the Russian Revolution of 1917, but rejected the Bolsheviks' seizure of power.